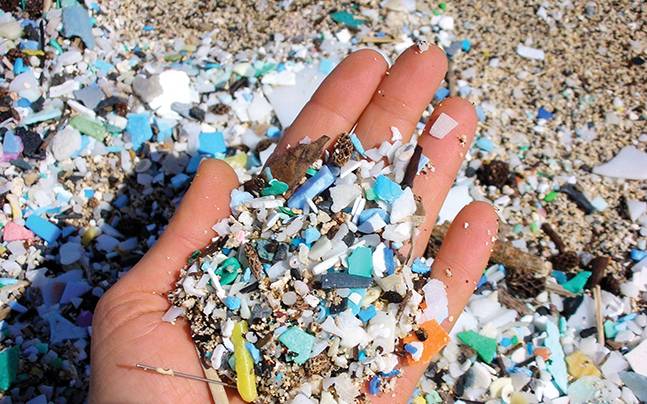 In the Bay Area alone, seven trillion tiny pieces of plastic – equivalent to about a million pieces each for every man, woman, and child in the Bay Area – flow into San Francisco Bay annually. These tiny plastic particles – called microplastics – break down into smaller and smaller pieces but never go away. The tiny particles make their way into the ocean, into the stomachs of marine animals, and ultimately become part of the food and water people consume.

A recent UC Davis study sampled seafood sold at local markets in Half Moon Bay, California, and found that one-quarter of the fish and one-third of the shellfish contained plastic debris. A survey comparing tap water across five continents found synthetic microfibers in almost every sample — and in 94% of samples in the United States.

Microplastics reach our water through several key sources. When it rains, tiny plastic particles like synthetic rubber tire dust flows from our streets and into our storm drains. In fact, a recent study found that stormwater is the primary source of microplastics in California’s coastal waters, with microplastics 300 times more likely to come from storm drains than any other sources. Synthetic clothing and textiles also release plastic microfibers with every wash that cannot be filtered out by traditional wastewater facilities. In the Bay Area, researchers have determined that billions of microplastics also flow through the region’s 40 wastewater treatment facilities annually.

So, what is California Coastkeeper Alliance (CCKA) doing to prevent microplastic pollution? We have developed a three-pronged strategy to stop microplastics from flowing to our waterways and ocean, while also providing drought resilient water supplies. First, CCKA has been at the forefront of advocating for local communities to capture their stormwater. California can capture and reuse enough stormwater to serve the entire City of Los Angeles by using rain gardens, green roofs, permeable pavements, and rain barrels. By capturing stormwater and allowing it to percolate into our groundwater, we not only allow the soil to naturally filter pollutants – like microplastics – but we also increase our drinking water supply by percolating stormwater into our local aquifers.

Second, CCKA is using our water recycling expertise to advocate for California to reuse all of our wastewater that is lost to the ocean. Most cities in California use water once, then dispose of it like waste. Hundreds of billions of gallons of treated wastewater are dumped into the ocean instead of being purified for potable uses. In 2017, we co-sponsored legislation that became a law requiring the state to develop first-in-the-nation regulations allowing utilities to deliver purified recycled water directly to customers by 2023. Additionally, in 2018 CCKA obtained a statewide goal to recycle all ocean wastewater. That goal was bolstered earlier this year by a California Ocean Strategic Plan that sets a timeline of recycling all ocean wastewater by 2040. By recycling all of our ocean wastewater, we not only filter microplastics out of our water but we tap into a huge opportunity to boost our local water supplies.

Finally, CCKA is seeking to capture the synthetic plastic fibers that shed in your washing machine. This year CCKA is partnering with Assembly Member Friedman to introduce Assembly Bill 3232, which would require all new washing machines sold in California to require a microfiber filters similar to a lint trap in your dryer.

Microplastics are ubiquitous within our community, our food, and the water we drink. That is why CCKA will continue to champion our three-prong approach to reducing the microplastics that flow daily to our waterways and the ocean. Because water is life. And microplastics have no future in it.