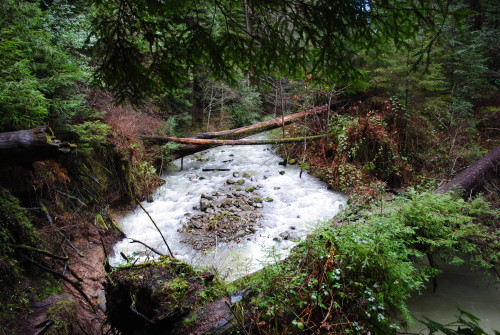 (San Francisco, CA) Initial projections of the April 1 snowpack assessment, a key indicator of water conditions, indicate that snowpack is near record lows and that water storage is less than 30% of normal conditions. The latest assessment of just how dry conditions are this year, coupled with water diversions and pumping for agricultural and urban uses, could spell disaster for Northern California rivers and streams, some of which are completely devoid of flow during critical salmon spawning seasons.

“The Scott River and other North Coast rivers are literally sucked dry, leaving salmon no place to spawn and robbing the Karuk and other tribal people of a critical cultural resource,” says Leaf Hillman of the Karuk Tribe.

Since 2010, a coalition of tribes, fishing groups and environmental groups have been urging the State Water Resources Control Board action to formally recognize rivers and creeks impaired by severely altered flow on the biennial Section 303(d) List. The State and Regional Water Boards have the authority and duty under the Clean Water Act to identify those waterways that are so degraded that they are unsuitable for fishing and swimming.

Northern California rivers and creeks desperately need this sort of agency action. The North Coast Regional Water Quality Control Board’s own staff report acknowledges that there is a “near complete dewatering of fisheries habitat” in the Shasta River below Dwinnell Dam, and that summer and fall flows in Mark West Creek were “either dry” or “too low to measure.” However, when the North Coast Regional Water Board released its list of impaired waterways in mid-March, the list did not include rivers and creeks impaired by altered flow.

“Like climate change deniers, there are those who seem to dispute clear scientific evidence that California rivers and streams run low or dry, even in years of normal rainfall,” said Zeke Grader of the Pacific Coast Federation of Fishermen’s Associations. “It is time for the Board to acknowledge and take action to address ‘flow-impaired’ rivers and streams so we can protect economically important salmon runs.”

The coalition is urging the State and Regional Water Boards to change course, and to list at least five disappearing rivers and creeks that are “clearly and incontrovertibly impaired, and for which low flows are so clearly a cause of impairments that there are no reasonable arguments against their 303(d) listing.” The North Coast Regional Water Board is holding hearings in Santa Rosa (April 8th) and Redding (April 9th)