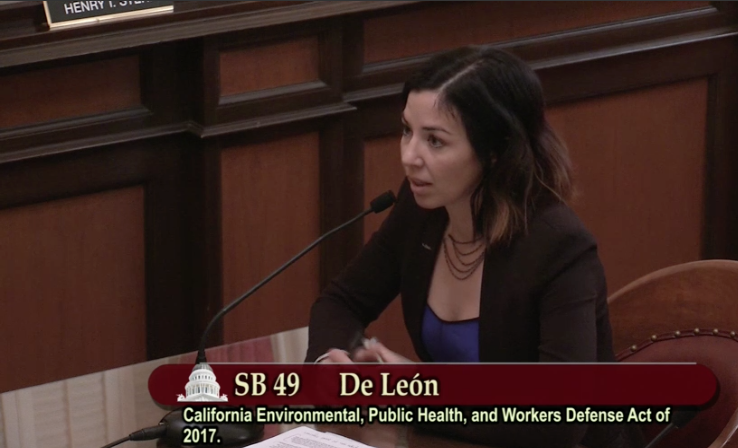 With a President that has signaled his intention to dismantle common sense safeguards for our environment and public health, it will fall to states like California to defend our clean air, water, and communities. That is why California Coastkeeper Alliance strongly supports Senate Bill 49 (SB 49) by Senate President Pro Tem Kevin de León and Senator Henry Stern. SB 49 would lock in current federal clean air, water, and climate standards to ensure California never bows to pressure from polluters to roll back fundamental environmental and health protections, even if federal rules change.

Strong state laws can provide a firewall against federal policies that put profits above the public good, but only if they are effectively enforced. Anticipating that a lack of government resources or political will could undermine enforcement of clean water laws, Congress in the 1970s included a provision in the federal Clean Water Act that allows private citizens to prosecute violations in cases where the government is unable or unwilling to enforce the law.

SB 49 is structured to preserve protections that we currently have under federal environmental laws, and that must include the citizen suit provision. The right of individual citizens to defend their neighborhoods from pollution when government fails to do so is essential for the well-being of California’s most vulnerable communities. Low-income communities suffer disproportionately from pollution and often lack the resources to advocate for government intervention. We must preserve the rights of citizens to take action on behalf of their communities, regardless of race, ethnicity, income, or political affiliation.

The citizen suit can be used to address industrial pollution in neighborhoods in Los Angeles like Sun Valley and Pacoima, where small scrap metal yards and other facilities may fly under the radar of Regional Water Board enforcement, but emit hazardous pollution on an ongoing basis.

The overwhelming majority of California businesses abide by longstanding clean water laws. SB 49 rewards responsible businesses that play fair by holding polluters accountable and preventing them from gaining a competitive advantage by shortcutting important safeguards. It ensures that companies with an ongoing pattern of unlawful behavior do not have a shield from citizen enforcement.

A last line of defense.

The private right of action compliments government enforcement efforts to deter unlawful behavior. They are mostly used to prompt companies to come into compliance. Before taking legal action, citizen groups must first collect clear evidence that a facility is breaking the law, for example, by monitoring and testing samples from a polluting facility or by presenting a facility’s own inspection report showing violations. Citizen groups must then provide 60 days notice to the relevant state agency, which can stop the action if it is deemed to be unwarranted.

SB 49 is the most important piece of legislation before the California Legislature this year because it will protect our economy and communities from the clear and present danger of the Trump Administration and ensure that California retains common-sense environmental protections that have worked for decades.

Businesses can sign a statement of support for this bill here: https://cacoastkeeper.org/environmental-defense-act/. If you are interested in supporting this effort, please contact Sara Aminzadeh, Coastkeeper Alliance Director ().