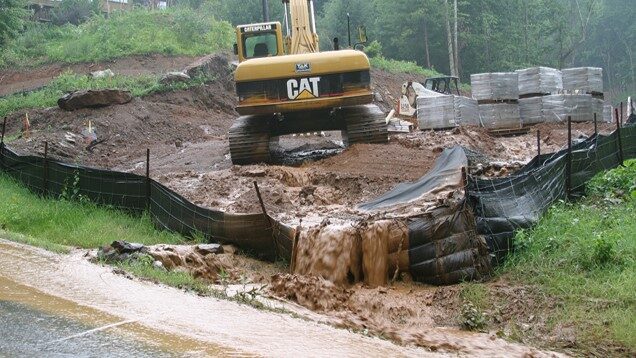 Eight years after the 2009 permit expired, the State Water Board has finally adopted a new statewide Construction Stormwater Permit. This permit will require construction sites to prevent stormwater from washing sediment, nutrients, metals, and other pollutants exposed on their sites into California’s waterways. The Construction Permit has become an important environmental battleground because, although it is set to expire after five years, like its predecessor this permit will likely control pollution at construction sites well after its expiration date. Since the draft was released, corporate interests have pushed for a permit that maintains the status quo and guarantees almost no consequences for polluting while California Coastkeeper Alliance has advocated for a permit that will actually protect California’s water quality and hold polluters accountable.

One of the main areas of contention is the use of action levels versus numeric limits. Action levels are toothless monitoring requirements and exceeding an action level is not a violation of the permit. These action levels allow construction sites to pollute again and again without consequence until they have finished their construction. We have been tirelessly advocating for the use of numeric limits instead, which are clear, commonsense pollution controls. The EPA has even stated that these limits “are the best way to quantifiably ensure industry compliance and to make reasonable further progress toward the [Clean Water Act] goal of eliminating pollutants into the nation’s waters.” In contrast, the regulated industry has thrown all of their political weight at the State Water Board to remove all numeric limits and replace them with action levels.

Through our advocacy, we were able to ensure that the permit contains multiple numeric limits. This is a major victory, as the Final Permit contains more numeric limits than even the EPA’s nation-wide construction permit. Unfortunately, Governor Newsom pressured the State Water Board to avoid the use of numeric limits for toxic pollutants in Los Angeles’ most disadvantaged communities, sacrificing clean water for corporate profit in a community which faces disproportionate pollution burdens.

California Coastkeeper Alliance is happy to see the updated permit finally get adopted and the expired permit finally laid to rest.  We have been engaged with this permit process since the beginning and will continue to advocate for stronger pollution controls so everyone in California can have fishable, swimmable, and drinkable waters.

Stay informed on the Construction Stormwater General Permit and our work to protect California’s waters by subscribing to California Coastkeeper Alliance’s monthly newsletter, becoming a lifetime member, or following us on social media: @CA_Waterkeepers.