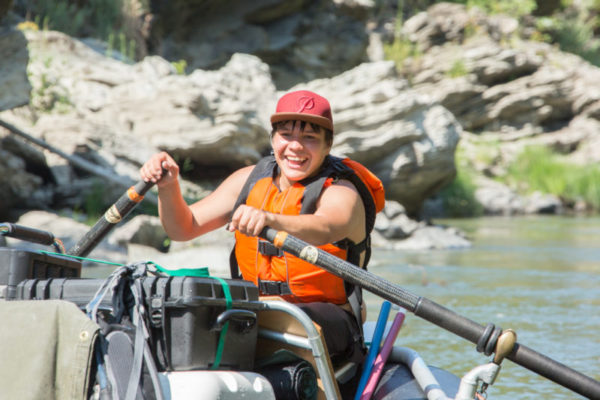 On July 29, youth from the Klamath Basin and Patagonia, Chile will celebrate the final day of a three-week journey on the Klamath River from its headwaters at Crater Lake to Requa, where it meets the Pacific Ocean. The celebration welcomes more than 50 people to shore in traditional Yurok redwood dugout canoes, rafts, and kayaks with a Yurok ceremony, food, family, art, and presentations. The international non-profit organization Ríos to Rivers organized the exchange with youth from two continents who are seeking to understand the threats facing their watersheds and to develop the skills needed to protect the rivers they call home.

“Before Ríos to Rivers, I never saw the upper Klamath basin or the dams, I only felt the effects of them,” said Jon-Luke Gensaw, a 19-year old Yurok Tribal Member with the non-profit organization Ancestral Guard. “The last few weeks have opened my eyes to the problems we share on a global scale.”

Beginning July 9th, Chilean and Klamath Basin youth traveled from the headwaters to the mouth of the Klamath River learning about fisheries, water quality, water allocation, dams, food security, and the cultural traditions of Klamath Basin tribes. Next February, the Klamath Basin youth will travel to Chile to explore the rivers of Patagonia. There they will learn about Chilean culture and the common threats to the health of their rivers.

The stories we learned on the banks of the Klamath River resemble my dear Baker River in Chile,” said
Alejandra Chodil, 15, from Tortel, Chile. “Let’s help the Klamath River; it’s sick from the dams.”

The pristine rivers of Chile are threatened by massive proposed dam projects. Participants in the exchange program took a tour of the Klamath River dams and learned about the plans to remove the four Klamath River dams in 2020. This will be the largest dam removal project in world history.

“One of our goals is to spark a conversation among youth around the world,” said Weston Boyles, founder
and director of Rios to Rivers. “Why do we continue to build new dams on one side of the world while dams
are being removed much sooner than expected on the other side of the world?”

The exchange program included seventeen youth from the Klamath Basin including members of the
Klamath, Karuk, Hoopa, and Yurok Tribes, eight youth from Patagonia Chile, and adult volunteers with Rios to Rivers, Ancestral Guard, The Warrior Institute, and Klamath Riverkeeper. Also joining the organizations was Chilean actress and activist Juanita Ringeling, who lives in California and supports environmental causes in both countries.