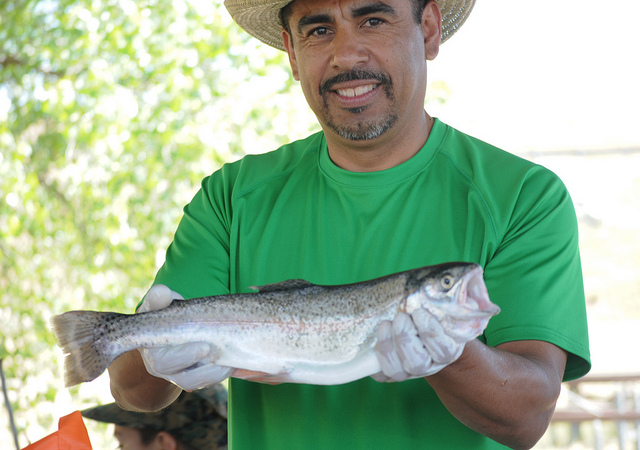 Conservation groups today filed a lawsuit in federal court against United Water Conservation District over its operation of a dam that blocks runs of endangered steelhead on the Santa Clara River. The Vern Freeman Diversion Dam near Saticoy prevents virtually any steelhead from returning to prime habitat upstream and degrades habitat downstream, according to the groups, which include the Wishtoyo Foundation, its Ventura Coastkeeper Program and the Center for Biological Diversity.

Southern steelhead trout are federally protected, endangered fish that mature in the ocean but return inland to spawn in their birth streams. The Santa Clara River historically supported thousands of steelhead. The 1,200-foot-wide, 25-foot-high Freeman Dam, located about 10 miles upstream from the Pacific Ocean, is now the main obstacle to steelhead migration. Its fish ladder is ineffective, and the dam now blocks almost all access to historic steelhead spawning areas. Southern steelhead have declined dramatically throughout their range, and the species faces a high risk of extinction.

The Chumash name for Southern California steelhead is “Isha’kowoch” (the glistening salmon). The Chumash people have a strong cultural interest in the recovery of the Isha’kowoch, which for more than 10,000 years have played a significant role in sustaining a healthy Santa Clara River ecosystem that spiritually and physically supported Chumash communities and villages.

“Experiencing Isha’kowoch runs and being able just to honor the harvest of a single Isha’kowoch will allow our people to reconnect with our culture and ancestors in ways that will not be possible without the construction of a functional fish passage over the dam and sufficient flow releases that allow for Isha’kowoch migration,” said Mati Waiya, a ceremonial elder of the Santa Clara River Turtle Clan and executive director of the Wishtoyo Foundation.

The dam’s operation also threatens wildlife downstream. The water district’s diversion of almost all the river’s flows, except for large storm events, harms not only steelhead but least Bell’s vireos, southwestern willow flycatchers and yellow-billed cuckoos — rare birds that depend on vegetation nourished by natural river flows.

“Without changes in how the Freeman Dam is operated, steelhead and other imperiled wildlife in the Santa Clara watershed face a grim future,” said John Buse, senior counsel at the Center for Biological Diversity. “This lawsuit is aimed at getting fish upstream and water downstream at the right time.”

“Not only is steelhead, vireos, flycatcher and cuckoo restoration possible, but it can be accomplished while providing enough water to maintain agricultural and municipal land uses in the Oxnard Plain,” said Jason Weiner, general counsel for the Wishtoyo Foundation. “Restoring these species to the Santa Clara River is vital to providing nearby residents and the river’s marginalized communities with their right to enjoy and benefit from healthy functioning ecosystems.”

The groups are represented by Christopher Sproul of Environmental Advocates, San Francisco, Patricia Weisselberg, Mill Valley, and their in-house counsel.

The Wishtoyo Foundation is a community-based 501(c)(3) nonprofit with over 700 members consisting of Ventura County residents, Chumash Native Americans, and the general public that enjoys, depends on, and visits Ventura County’s inland and coastal waterbodies. Wishtoyo uses traditional Native American Chumash beliefs, practices, songs, stories and dances to increase awareness of our connection with the environment and to preserve the maritime culture and resources of the Chumash people and coastal communities. Core values of the Chumash include sustainable living and respect for the environment. In 2000, the Wishtoyo Foundation launched Ventura Coastkeeper to protect, preserve, and restore the ecological integrity and water quality of Ventura County’s inland waterbodies, coastal waters, and watersheds.

The Center for Biological Diversity is a national, nonprofit conservation organization with more than 1 million members and online activists dedicated to the protection of endangered species and wild places.