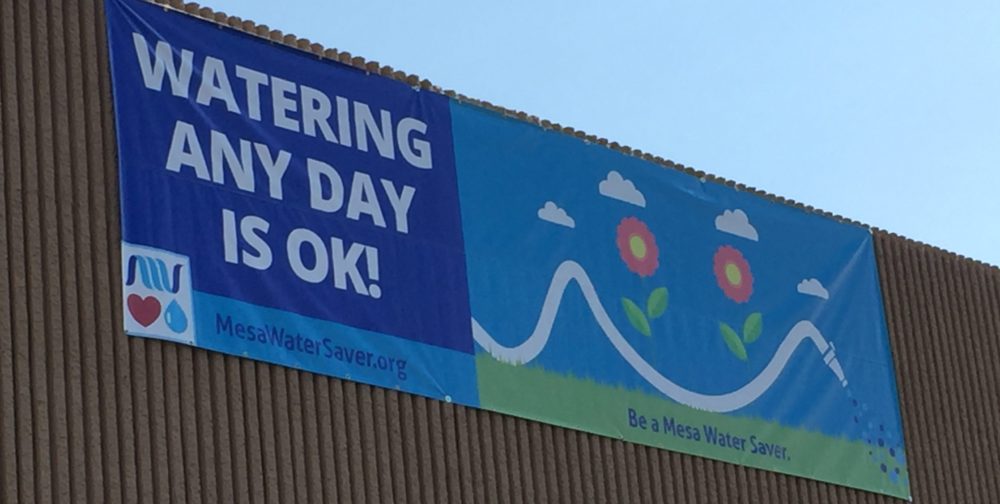 SACRAMENTO (Nov. 1, 2016) — For the third month in a row – since the State Water Resources Control Board abandoned its hugely successful mandatory urban water conservation program in favor of a ‘self-certification’ scheme –  California residents have conserved less water. According to a report just released by the State Water Resources Control Board, Californians conserved only 18.3 percent in September compared with the same month in 2013, falling significantly from the 26.2 percent savings we achieved in September 2015 under mandatory conservation.

Emergency and long-term water conservation standards are being developed pursuant to a series of Executive Orders issued by Gov. Jerry Brown, who has identified “mak[ing] conservation a way of life for every Californian” as the top priority of his California’s Water Action Plan.

With the State Water Board, California Department of Water Resources and several other state agencies poised to release a draft long-term conservation plan on November 14, environmental groups are calling for the reinstatement of emergency drought regulations that proved so successful until long-term standards are adopted.

“The State Board has failed the people of California by letting water agencies off the hook for mandatory conservation. That sent a very confusing message to residents, who are wrongly being told it’s OK to water their lawns or roll back the conservation efforts they’d implemented over the past few years.

“As we face a potential sixth year of unprecedented drought, it’s critical that we reverse this backsliding trend by returning to mandatory conservation targets and adopting a suite of strong permanent conservation measures. We need meaningful regulations that are going to make a real difference in our homes, businesses, and farms across the state.”

Following is a statement from Sara Aminzadeh, executive director of California Coastkeeper Alliance:

“Governor Brown has a real opportunity to cement his legacy as an environmental champion by leading the charge on aggressive water conservation standards to ensure our state’s water security. We can’t continue to lurch from drought emergency to drought emergency. We need to recognize the reality of less predictable water supplies due to climate change, and adopt permanent conservation standards that will allow California’s environment, communities and economy to thrive.”

Following is a statement from Jonathan Nelson, policy director of Community Water Center:

“At a time when so many of our communities still lack access to safe, reliable drinking water, we should not have abandoned successful emergency mandatory water conservation targets. The drought still continues in significant portions of the state, so we must continue to promote the Human Right to Water by implementing water conservation response measures that take the unique needs of our most vulnerable communities into account.”

The mandatory conservation targets were replaced with less onerous self-certification standards earlier this year by the State Board as the agency indicated it wanted to shift its focus to long-term water use standards. As a result, over 80% of water agencies adopted zero-conservation targets, despite the state’s ongoing and historic drought. At the same time, many in the environmental community are concerned with how the long-term standards are being developed, including the possibility that even the most basic requirements – standards for indoor urban water use – may not be enforceable for nearly a decade.

With the transport, treatment and heating of water being a major electricity user in the state, water conservation also has the added benefit of reducing energy use and the state’s carbon footprint, another issue near to the Governor’s heart.

About the Natural Resources Defense Council

The Natural Resources Defense Council (NRDC) is an international nonprofit environmental organization with more than 2 million members and online activists. Since 1970, our lawyers, scientists, and other environmental specialists have worked to protect the world’s natural resources, public health, and the environment. NRDC has offices in New York City, Washington, D.C., Los Angeles, San Francisco, Chicago, Bozeman, MT, and Beijing. Visit us at www.nrdc.org and follow us on Twitter @NRDC.

Using law, policy and science, California Coastkeeper Alliance supports and amplifies the work of 12 local Waterkeeper programs to fight for swimmable, fishable and drinkable waters for California communities and ecosystems.  CCKA was founded in 1999 with the belief that a healthy ocean and coast and clean water is vital to California’s economy, public health and way of life. Visit us at www.cacoastkeeper.org and follow us on Twitter @CA_Waterkeepers.

About the Community Water Center

The Community Water Center (CWC) is a non-profit environmental justice organization based in California’s San Joaquin Valley, whose mission is to act as a catalyst for community-driven water solutions through organizing, education, and advocacy. CWC’s fundamental goal is to ensure that all communities have access to safe, clean, and affordable water. CWC helps build strategic grassroots capacity to address water challenges in small, rural, low-income communities and communities of color. For more information, visit CWC’s website at www.communitywatercenter.org.