California’s Drought is a Double Threat for Small, Groundwater-Reliant Communities 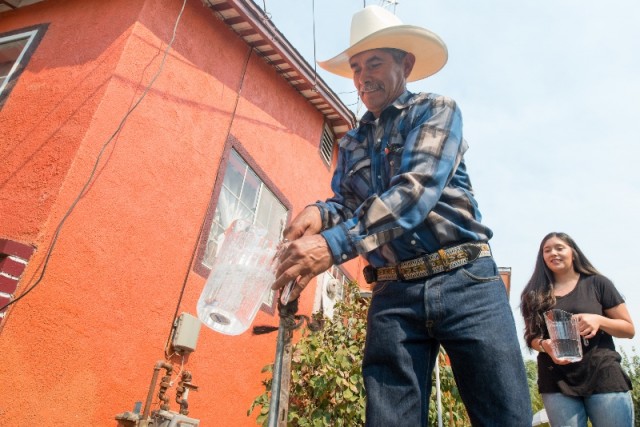 Nearly half of California’s landscape is currently in “exceptional drought“—a stage beyond extreme drought where fields are left fallow, wetlands dry up, native plants and animals die, algal blooms make waters unsafe to swim, and fire season is heightened.

This year’s drought has already prompted the state to issue curtailment orders to thousands of diverters in watersheds like the Sacramento-San Joaquin Delta, leading agricultural water users to pump more groundwater. It has also forced rural populations dependent on this over-pumped groundwater to find other solutions: for example, the majority-Latinx community of Teviston found itself relying on bottled water after the town’s only well broke in June. A new well could demand more than $4 million from Teviston’s 700 residents, who already pay nearly $100,000 each year in water fees. While thousands of wells are expected to go dry this year, largely in the less wealthy, rural communities that are more likely to rely on shallow wells, water flows to more densely populated, more affluent communities in places like the Bay Area will likely see no reduction in their water supply, which often flows right past rural communities.

But water supply is not the only problem that groundwater-dependent Californians in underserved areas will bear the brunt of. In a drought year like this one, these communities will be more likely to see systemic inequity result in impacts to their drinking water quality as well.

Over-pumping of groundwater by agriculture in the San Joaquin Valley, left virtually unrestrained until only recently, causes levels of dangerous chemicals in drinking water to rise. When land subsides more than three inches in a year in the valley—which it has done more than four times over in a single year, and is almost certain to do during this year’s drought, when groundwater demand is so high—the chance that residents’ faucets release water that has hazardous arsenic levels triples. Groundwater supplies about 40 percent of California’s water in a wet year. During a dry year, that number grows to 60 percent.

Communities in the San Joaquin Valley depend even more heavily on groundwater—nearly 95 percent of the valley’s population relies on groundwater for drinking. In those same areas, agricultural groundwater pumping has caused water quality to be degraded at a higher rate than in wealthier communities. People of color and less affluent families who rent their homes in the valley are more likely than white people and wealthier homeowners to be exposed to such high levels of arsenic in their drinking water. Similarly, these communities are more likely to have unhealthy levels of nitrate and other contaminants in their water.

At the same time, historically marginalized populations are, unfortunately, underrepresented in the very groundwater agencies California has mandated to try to control the over-pumping that harms them.

Without a history of regulation, agricultural groundwater pumping increased unchecked and unmonitored for decades. When the California legislature passed the Sustainable Groundwater Management Act (SGMA) in 2014 to halt overdraft and protect groundwater basins from continued depletion, it placed the responsibility for preventing harm to drinking water users on local Groundwater Sustainability Agencies (GSAs), which manage groundwater usage in basins across the state. SGMA requires these agencies to adopt plans to reach sustainability within 20 years of implementation. As of last year, all critically over-drafted basins were required to submit finalized plans. By early next year, all remaining medium- and high-priority (read: stressed) groundwater basins must come up to speed.

But localized groundwater management will not solve the problem of the socioeconomic disparities faced in California. Access to clean drinking water requires equitable planning processes.

Disadvantaged communities relying on small water systems—like Teviston and nearby East Porterville—have less representation in GSAs than their wealthier counterparts. In fact, according to a 2018 study, nearly half have gone unrecognized. This means that the members of such groups are likely to carry less political power in the planning process. Meanwhile, agricultural interests dominate GSA boards.

As the GSAs develop and revise and implement their plans, these agencies must give marginalized groups louder voices in the process—ones that will bring to the forefront threats like arsenic and nitrate contamination.

California Coastkeeper Alliance fights for drinkable, swimmable, fishable waters for all Californians. This includes amplifying the voices of those most impacted by water decisions, and reversing inequities in California’s water policies by increasing equitable representation at the highest levels of decision-making.

« Holding Central Coast Agricultural Polluters Accountable
Our Ocean is in Peril: Here’s What We Need to Do »